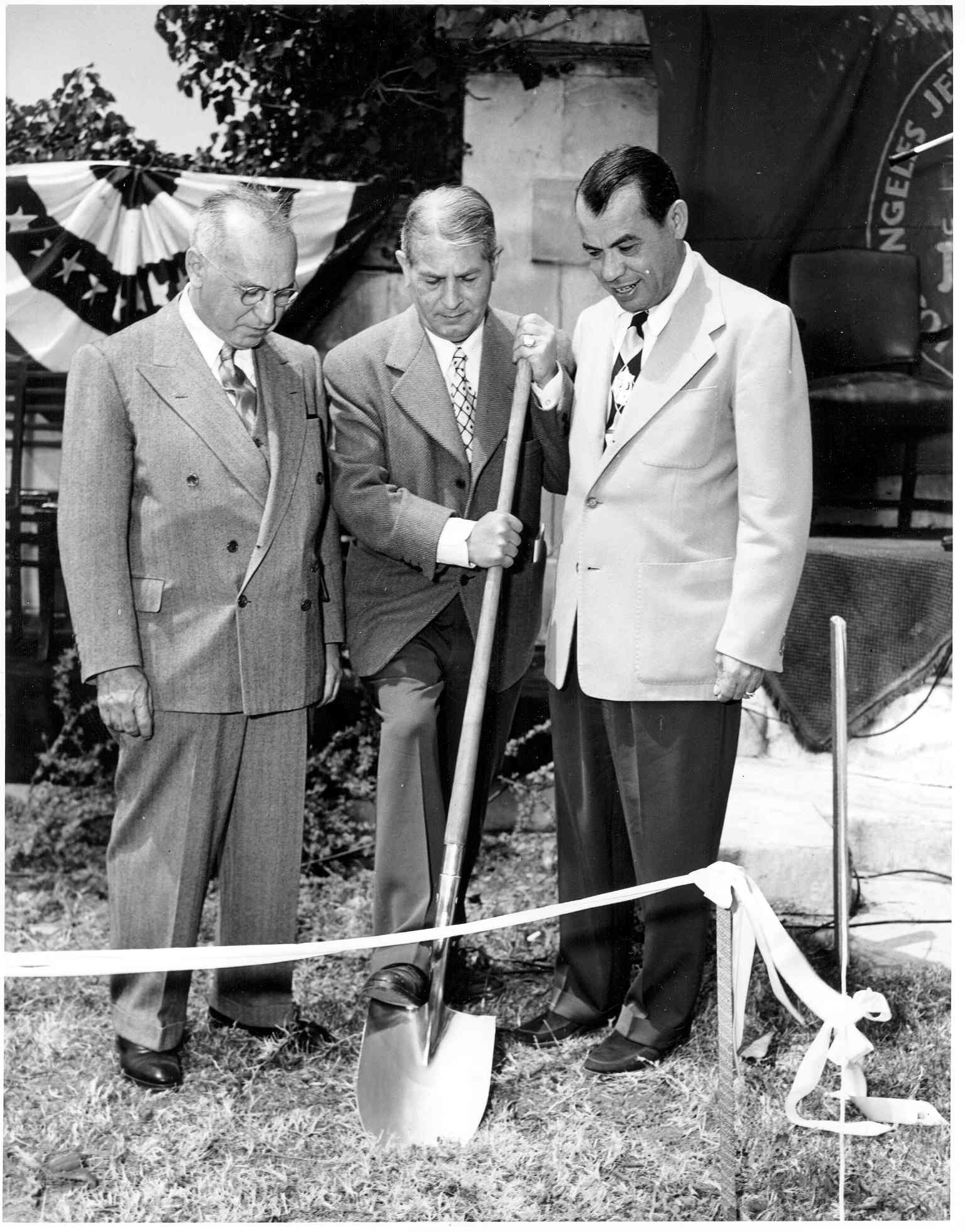 "Demanding as the past has been, the future inevitably will be even more demanding. We cannot begin to dream what lies ahead of us in the next decades to come."

In 1954, the Jewish Community Foundation of Los Angeles was established by a small group of Jewish leaders who, in a time of post-war prosperity, had the wisdom to plan for the community's future needs and build permanent resources for the community.

Sarah Federman Hersh Kuttnauer's bequest of more than $1 million was, at the time, the largest single gift ever made to The Foundation.

In the 1960s, affordable legal services barely existed in Los Angeles. A small group of lawyers, rabbis, and community activists responded with a plan to offer free legal assistance to poor residents. The Jewish Community Foundation provided seed funding for what would eventually become Bet Tzedek Legal Services, the "House of Justice."

The "Making Marriage Work" program was developed in 1975 at Temple Adat Ari El, expanded thereafter with a Foundation grant. The program provides premarital and newlywed counseling to young synagogue members.

In the 1980s, The Foundation responded to the emergency resettlement of Jews from other countries, including Ethiopian Jews, by providing a $1.5 million grant.

After the demise of Haile Salassie, thousands of Ethiopian Jews suffered persecution and torture; tragically, 2,500 were killed and 7,000 were rendered homeless. The Foundation was the first organization to respond to the LA Jewish Federation’s call for financial assistance by providing a $1.5 million grant.

Nechama: A Jewish Response to AIDS, the first Jewish AIDS program in America, began in 1986 in Los Angeles with seed funding from The Foundation to Congregation Beth Chayim Chadashim to educate the Jewish community about AIDS. Nechama, Hebrew for “comfort” or “compassion”, soon expanded to deliver services to people with AIDS and their families and caregivers.

Beit T’Shuvah – “House of Return” – opened its doors in 1987, thanks to funding from the Jewish Community Foundation for the purchase of a house near downtown Los Angeles.

Foundation funding enabled the purchase of Beit T’Shuvah’s original site. Beit T’Shuvah helps those recovering from addiction through a combination of psychotherapy, the 12 steps of the Alcoholics Anonymous Program, spiritual activities rooted in the study of Torah, creative arts expression, vocational counseling, social/recreational activities, and other forms of therapy.

Marvin I. Schotland joins The Foundation as President & CEO.

Over the next twenty-five years, under Mr. Schotland’s stewardship, The Foundation’s assets grew from $90 million to over $1 billion.

The Foundation was among 30 institutions which provided pooled funds to support the Los Angeles Urban Funders (LAUF) as a direct result of the 1992 Los Angeles civil unrest.

Los Angeles Urban Funders (LAUF) began in 1996 as a direct result of the 1992 Los Angeles civil unrest. It was supported through pooled funds from more than 30 institutional partners, including The Foundation. LAUF supported multi-year projects in three disadvantaged communities: Pacoima, Vermont/Manchester, and Hyde Park.

StandWithUs was founded in 2001 with seed funding from the Jewish Community Foundation and its longtime donors Newton D. and Rochelle Becker.

StandWithUs is a leading pro-Israel education and advocacy organization. This international organization advocates for a secure future for Israel through fact-based discussions, literature, and educational programs.

The Foundation significantly enhanced its Israel Grants program to fulfill the wishes of Ellen and Werner Lange.

Ellen and Werner Lange, of blessed memory, created a multi-million dollar endowment fund at The Foundation to support Jewish communities in Los Angeles and Israel. Through this endowment, The Foundation’s Israel Grants expanded significantly.

The Foundation’s Cutting Edge Grants Initiative was launched in 2006 to provide major multi-year grants to support new and innovative programs in the Los Angeles Jewish community, and encourage creative thinkers, social entrepreneurs, and innovative organizations to propose significant and transformative programs of high visibility and impact.

Launch of the Arts in Schools Giving Circle, a collaborative effort to fund over 150 arts residency programs in LA County public schools.

In 2006, The Foundation and the Los Angeles County Arts Commission launched a collaborative effort to fund over 150 arts residency programs in LA County public schools.  Thousands of students in grades K through 12 in fourteen school districts benefitted from more of these arts programs.

$1M to help those in need during the economic downturn

In response to the economic downturn, The Foundation distributed $750,000 emergency funding to five local Jewish social service agencies that comprise the Jewish Family Relief Network to help alleviate the impact of the economic crisis on members of the Greater LA Jewish community and others. In addition, The Foundation awarded $250,000 to the Emergency Cash Grants Initiative of the Jewish Federation of Greater Los Angeles.

The Foundation’s Center for Designed Philanthropy helps donors shape meaningful, personalized philanthropic strategies, build consensus among families, and develop creative solutions to magnify the impact of their giving. It also manages the vetting and distribution of community dollars through institutional grant programs.

The Foundation launched Voices of L.A.: The Krupnick Festival of the Arts, and surpasses $1 billion of assets.

Donors Harry and Belle Krupnick created an endowment fund at The Foundation so that their legacy of supporting the arts in Los Angeles would live on. In the summer of 2014, The Foundation created Voices of L.A.: The Krupnick Festival of the Arts, a city-wide, cross-cultural collaboration of music, dance, spoken word, and visual arts that was attended by thousands.

For the first time in its history, The Foundation surpassed $1 billion of assets.

In 2017, The Foundation and its 1300+ donors and families distributed a record-high $100 million in grants to more than 2,000 nonprofit organizations.